Especially in banana bread. (Now, I honestly feel like this is an unnecessary qualifier because chocolate is always magical, but it works wonders on the already quite impressive banana bread.)

When miracle of miracles, the roads were frozen for longer than 24 hours because Houston weather remained relatively static for a whole day (and there was still ice in my backyard. How is it harder for Houston to return to heat from cold than sun to rain?). Obviously, when I get stuck inside for two days and naturally go a little stir crazy, I turn to my new project!– and just in time for my dad’s name day. *A name day “consists of celebrating a day of the year that is associated with one’s given name”– very common in Greece. (Thanks, ever-trusty wikipedia for having a pretty coherent/accurate explanation!) Since it was his name day, I gifted my dad complete control in choosing his recipe (except we had to have the ingredients on hand, I couldn’t have already made it and NO seafood! What did I say about “complete” control, again?)

He chose well. Very well: cocoa banana bread. He and I and my mom (and most sane people I know) are chocoholics, and banana bread is the perfect vehicle for chocolate. So, no. There was no melting of chocolate, but the cocoa packed a richer, bolder (and darker in color) punch than melted chocolate for this dish. The result was a moist, delectable banana bread that honestly seemed to be more of a banana cake and brownie hybrid (but no complaints with that mash-up!). 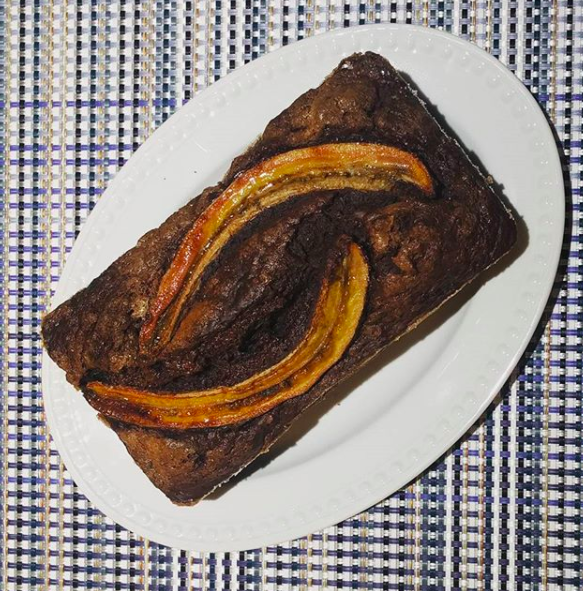 Making the recipe was baking at its purest: stand mixer with sugar and butter, then eggs, then pre-mixed dry ingredients, then add-ons (in this case sour cream and banana). There is a reason most baking follows this pattern: cookies, cakes, browns, muffins. It’s simple, fairly easy to clean up and incredibly effective.

This is now gonna be my go-to: “but it has bananas, so it’s healthy-ish.” (<<not entirely true, but a good enough excuse to make this bread very often). I think I spent my second snow day well: finding a new manner to consume chocolate!

My favorite food blogs:
Manger
The Year in Food
Not Without Salt